I want to say in advance that the images in this post may be graphic for some of you. If you cannot look at graphic images then I don't recommend that you continue past the story. But I would like to encourage you to read the story and try to educate yourselves, and if you think you can handle it then continue on and look at the images. I promise, this story will make you look at your family and your life in a whole new way.

If you've been keeping up with my blog-site for a while, you will remember Lucas. I first met Lucas and his parents in March. In late February/early March, I was contacted by a client (thank you Sara!! I owe you SO much for putting us in contact!) who told me about Lucas and his parents, and said that Lucas would be turning a year old very soon but he was hospitalized. Unfortunately, this wasn't the first time he was hospitalized either, so Lucas had never had professional pictures taken. So I got in contact with Michelle, Lucas' mom, and I offered to do a session for Lucas' first birthday, even if it was in the hospital. Michelle was thrilled, and so was her husband, Stephen. He even got out of work early to join us! We had such a great time that afternoon in Lucas' hospital room. We took pictures and when Lucas fell asleep we talked for hours.

You see, Lucas has Congenital Heart Disease - and so do I. We have different defects, but we are linked by the same common denominator - we both have broken hearts. Lucas' specific heart defect is Hypoplastic Left Heart Syndrome. Essentially, Lucas only has half a heart. The left side of his heart is hypoplastic - that means that it never developed in utero. This means that Lucas is only living on the right side of his heart, which, unfortunately, is the weaker side of the heart. I bet you didn't know that people could live with only half a heart, did you? And do you know why you probably didn't know? Because CHD isn't something that people are very aware of. About one of out every 100 babies born have CHD - yet people still aren't aware about this. And this is exactly why Michelle and Stephen (and I!) wanted to do these pictures, because graphic as they may be, this will help raise awareness and hopefully educate people.

So anyway, back to my story. In March I did Lucas' one year old session at the hospital, and we had such a good time. Lucas had just had surgery the day before but he was so happy and had such a great time having his picture taken. I found such a beautiful little boy under all the scars, wires and tubes, and I found new friends in Michelle and Stephen. Those folks give new meaning to the words "love" and "strength" - as do every other CHD parent. They love Lucas so fiercely that they will do anything for him, and they have such strength that I had NEVER seen in anyone outside my own mom and dad. I fell in love with this amazing family and such a strong bond was made - in just the few hours that I was there. As Michelle said, not because I knew them from the beginning of their journey or they knew me from the beginning of mine, but because we are walking on the same CHD road.

While I was there we also talked about Lucas' future surgery. You see, HLHS has no cure. None of the CHD's have any cure. There are just surgeries on top of surgeries, and medicines on top of medicines to try to repair the hearts and keep them going, but there is no cure. I'd like to make it clear that a heart transplant is NOT a cure either. As a matter of fact, in our CHD Community on FB a little girl (also with HLHS like Lucas) received a heart transplant a few weeks ago, and just last night (Oct 15, 2012) she passed away after she went into heart rejection and she had an infection. So I would like to make it clear that heart transplants are NOT cures for CHD. So for HLHS, there were three planned surgeries to help repair the heart. The first, the Norwood, is done when the babies are only a couple of days old. The second, the Glenn, is done when the baby is anywhere between 6-9 months old. And the third surgery, the Fontan, is done when the toddler is anywhere between 2-5 years old or so.

Well, Lucas was diagnosed very late in his little life with HLHS so he never had the Norwood, he had something else done at 3 weeks old (for the life of me I can't remember what he had done). Then at a few months old he had his Glenn. Lucas had SO many ups and downs after his Glenn, though. Normally, babies have a period of somewhat health between the Glenn and the Fontan, but not Lucas. And that's how we met - when Lucas was having a hard time.

However, it seemed that after the procedure he had when I met them he was doing okay. Not excellent, but the little dude wasn't in the hospital as much and seemed to be "okay". So Michelle and I then planned this really big photo session out where they live for Lucas' 18 month old milestone. We planned several locations, and even a Halloween costume! And then CHD interfered. Lucas started getting very sick and his parents were told that he needed another open-heart surgery. Totally unplanned. They were wrecked as were the rest of us who have been following Lucas' journey. This simply shouldn't happen. 18 month olds shouldn't have to be facing surgeries after surgeries. But this is Lucas' life. And I wanted to share this with everyone because it's something so important to me and Lucas' parents.

Now, the initial plan was to get me IN the OR and take pictures of Lucas with his chest open, etc. Unfortunately the hospital didn't allow it so it didn't happen. But I got the opportunity to sit with Michelle, Stephen, Michelle's mom, sister and aunt, and Stephen's parents in the waiting room while we waited for Lucas to come out of the OR. I have to say, their families are amazing. It was such a pleasure to sit with them and talk while we waited for Lucas. It was such a tough surgery, but Lucas was a champ! So after his surgery I was able to go into the Cardiothoracic Intensive Care Unit (CTICU) and take pictures of him immediately post-surgery. And those are the images posted below.

They are graphic, I know. But this is real. This is Lucas' life. These are the brave battles that he and his family must fight behind quiet hospital doors for every.single.breath. This is graphic, but it's real. 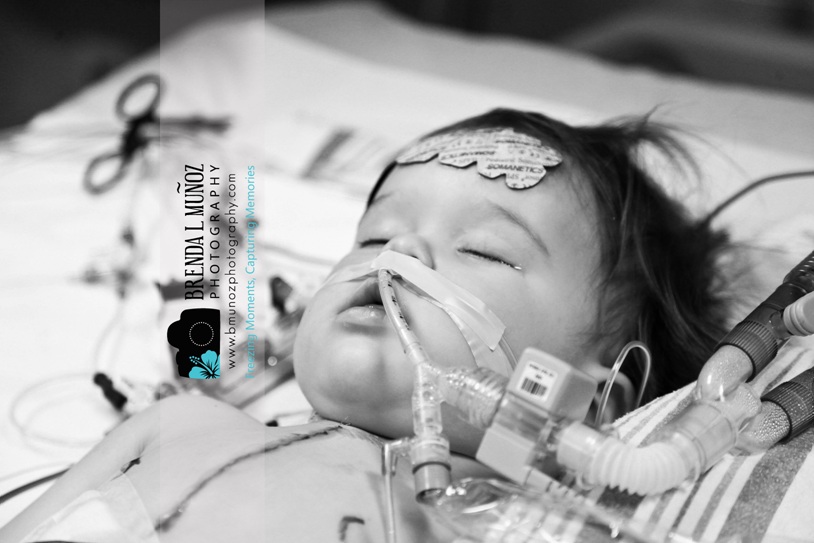 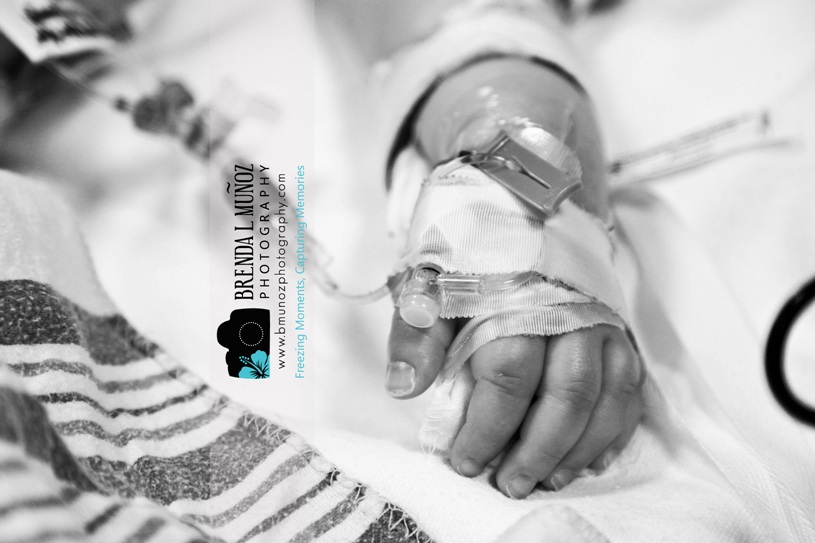 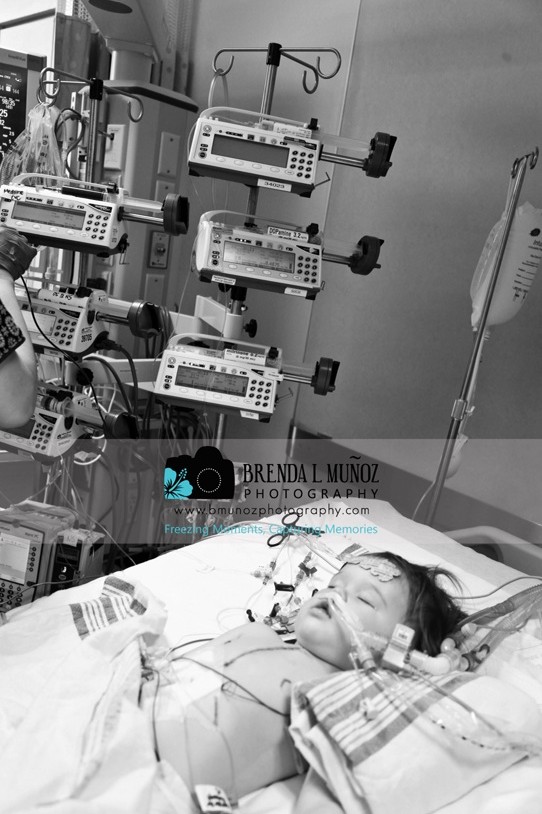 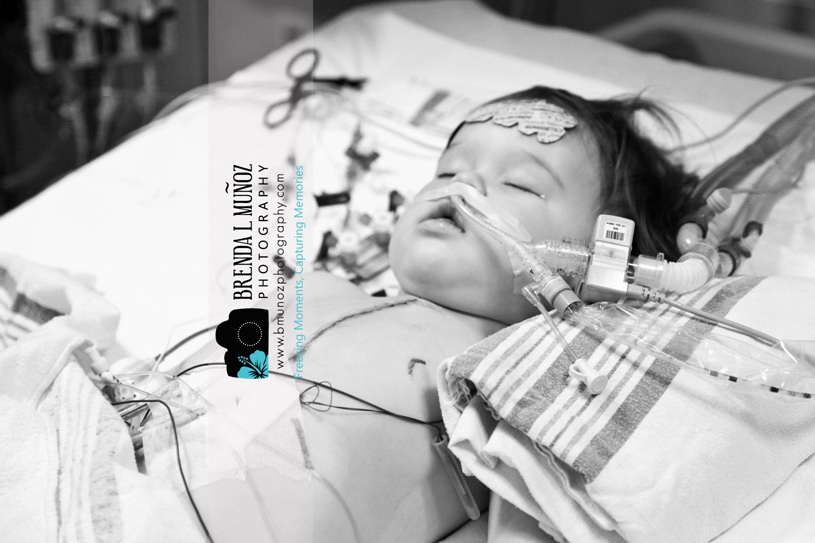 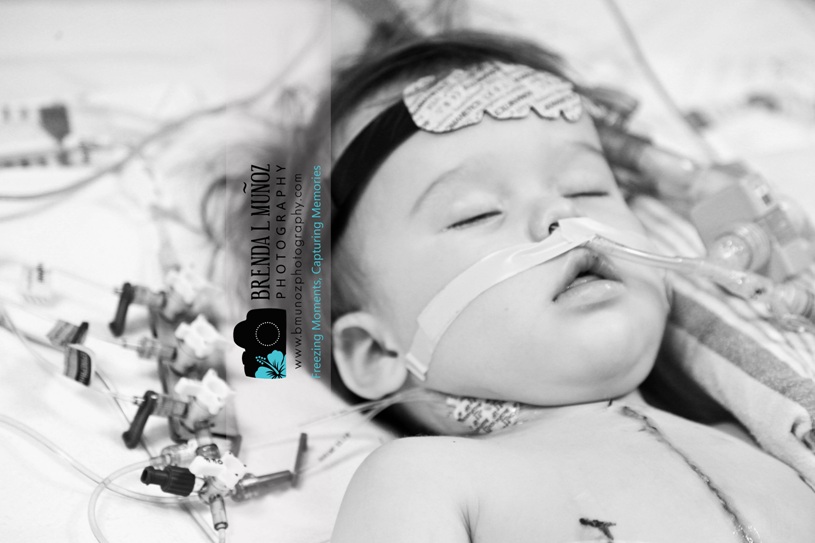 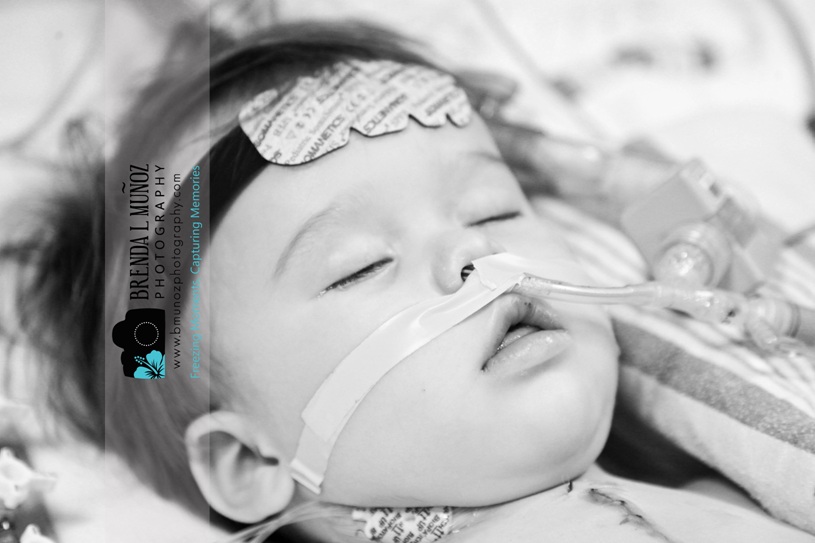 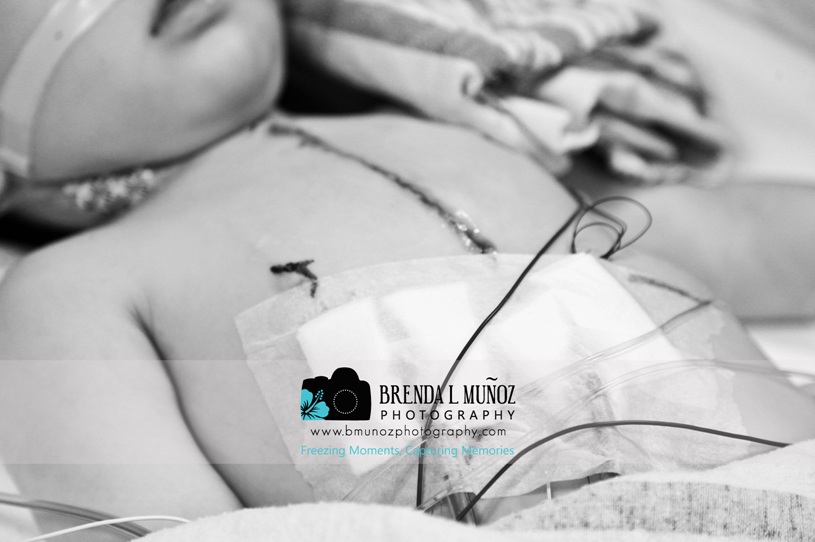 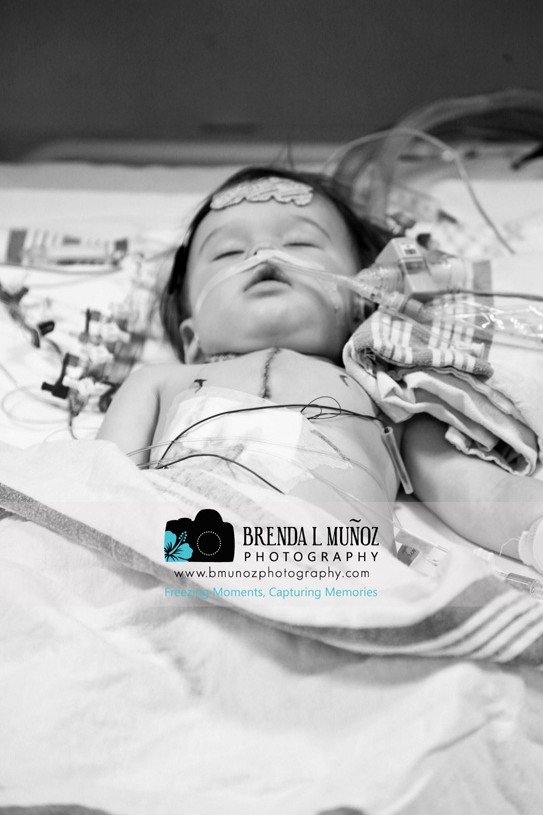 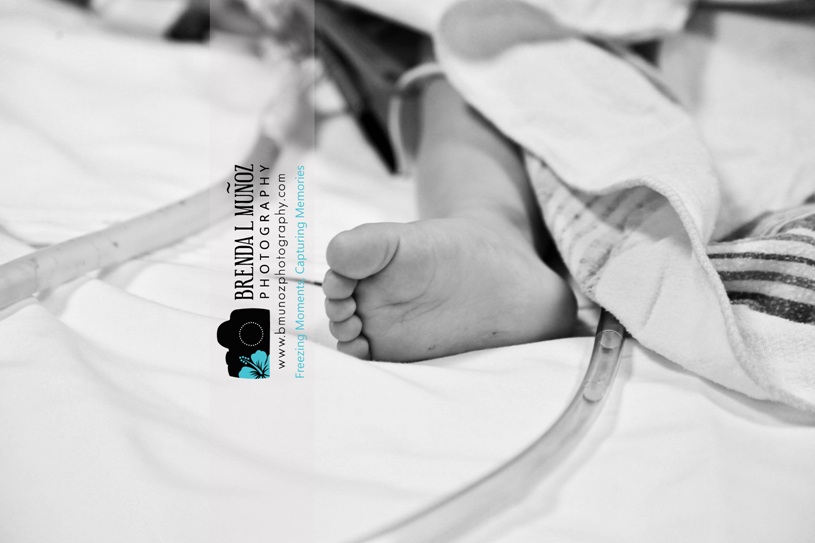 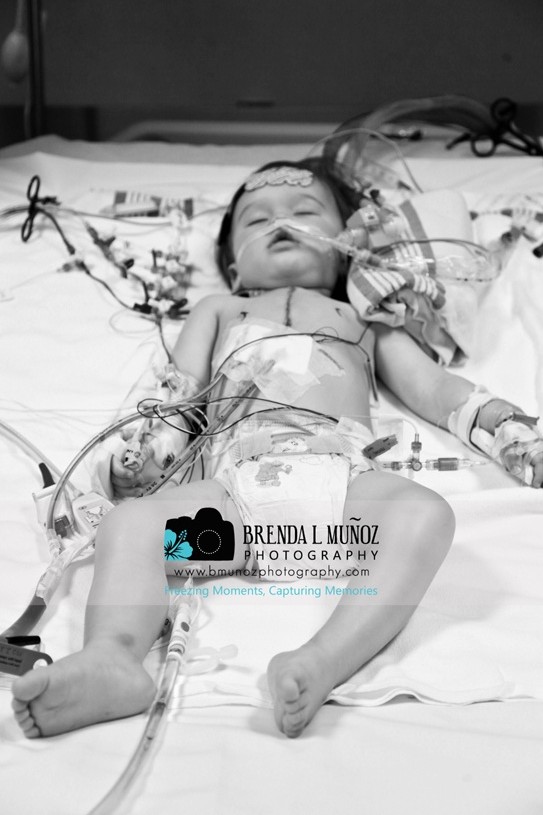 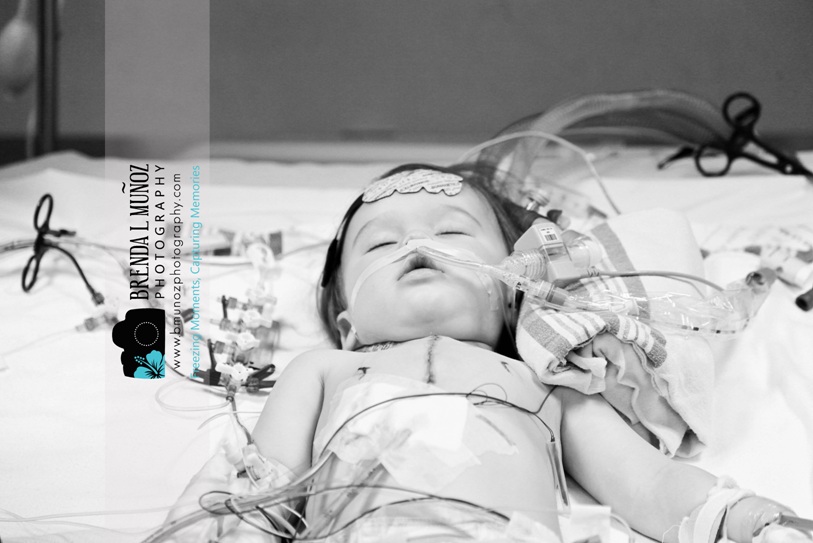 I would like to add a little update to finish off this post. Lucas' surgery was on Thursday, October 11, 2012 and I went to visit him on Sunday and see how he was doing. I just have to say poor little guy. He had already been extubated (the breathing tube that you see in these images had been taken out) and he was out of the CTICU and in the step down unit, but the poor little guy was MISERABLE. He was in so much pain and uncomfortable and annoyed by this whole situation that he just couldn't sleep. As a result, Stephen and Michelle couldn't rest either. So while Lucas is recovering well, he still needs SO many prayers so that he can continue healing and resting, and so that his parents can get some much needed rest too.

I ask that you don't just look at this post and feel sorry for them. Instead, I ask for one thing: that you will educate yourselves more on CHD and get involved. Get involved in Heart Walks, support organizations that help families going through these journeys (such as Sisters by Heart, which supports HLHS families). The ONLY way we will ever beat CHD is by raising awareness and funds so that more research can be done. By doing this you will be helping Lucas, me and SO many other kids, more than you could ever imagine.

Michelle, Stephen and Lucas.... I don't even know what to say. You are incredible. You inspire me more than you will ever know. I love you guys, and you're always in my thoughts and prayers and I can't wait to see you again very, very soon. - Hugs, Brenda
Posted by Brenda Munoz at 1:20 PM
Labels: lifestyle, special needs, toddlers
Newer Post Older Post Home